In case if you need to track down some ghosts but don’t want to spend money on any expensive perks then this article is going to be very helpful for you. As in this post, I will tell you guys about the best paranormal apps that will help you to detect the spiritual powers and also you will be able to communicate with ghost powers by using the same technology as other highly equipped paranormal gadgets do.

Communicating with spirits by using the latest paranormal technologies is known as Instrumental Trans Communication (ITC) but unfortunately, no one has the full understanding of the nature of paranormal creatures and activities, and most of the apps include a disclaimer that says that they do not give the surety about the accuracy of data and messages received by this software.

Several apps are based upon the randomization algorithms to generate words from a database of words or phonics. While other apps are based on the detection of fluctuations in the electromagnetic field.

Below are Top 6 Paranormal Apps for Android and iphone Explained:

This app is known as one of the best spirit box type app which is available only for mobile devices. Also, the app is pre-loaded with a library of phonetics and word elements.

This app is used by various paranormal investigation teams including the one which was featured in ghost hunting television shows such as ‘Ghost Chasers‘ and ‘Ghost Hunters International’. This app has achieved many positive reviews in the app stores with some excellent comments. This app is one of the most expensive paranormal apps of its type.

Compatible Devices: This app is available to download for both Android and iOS devices.

Ghost Hunting Tools is another free and popular application that provides its users with free access to the EMF meter, EVP detection, and word analysis as well. The mobile devices usually don’t have access to any EMF meter. The EMF meter also involves other necessary functions of your smartphone such as compass and accelerometer which are used in order to find the electromagnetic fields, these electromagnetic fields are said to be associated with the spiritual creatures.

Another amazing of the feature of this app is that it shows a graph of the base-level noise from FM bands and the microphone, after that, it subjects strange sounds on the top of the app.

Ghost Detector is another free and popular app in order to monitor paranormal ghost activities. The good thing about this application is that it is available for both Android and iOS users. This app will try to help you in order to detect the presence of spiritual creatures near you. This app is based on the latest technology which allows you to see the ghosts near you.

This app works on the basis of the detection of electromagnetic fields (EMF/EM-Field). The app exhibits a user-friendly interface that is easy to use and along with a good user manual guide you can easily use this app on your smartphone without facing any issues. The application also offers a temperature meter that can be used to measure the temperature.

This app is available for Android as well as iOS users. It uses some of your phone sensors and other mobile inputs including the magnetometer. This application brings real measurement through the magnetometer sensor of your cell phone and it allows you to get automated EMF recording that can be measured for a long time.

Paranormal EMF Recorder and Scanner is capable of analyzing the recorder EMF data from the application by utilizing the interactive and intuitive charts. This app offers a good user interface with full support that is provided for almost all device orientations. The developers of this application are working hard to bring more and more exciting features for their users.

The TRS Ghost Finder is a fine application that can easily change your mobile phone into a very effective ghost detector instrument that will deliver you the quality results. This app was developed by TwoRobotsStudio’s and this app allows you to find a spooky and exciting world of spirits right from your mobile phones. This application contains social algorithms that are adjusted in this app finely. 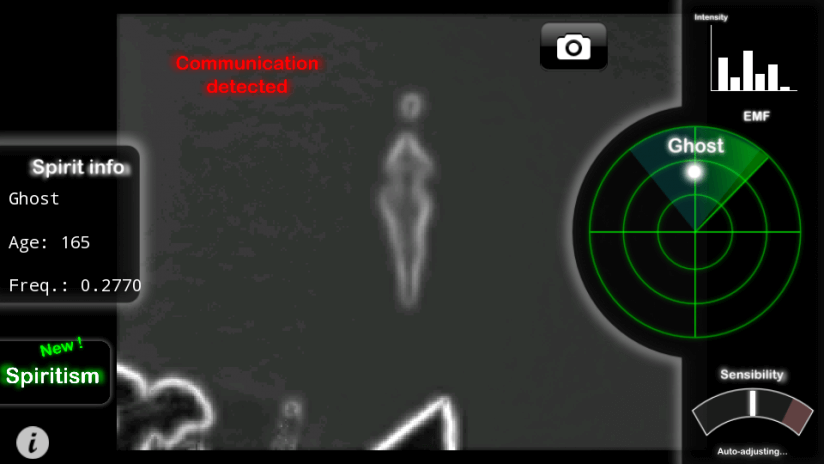 Ghost Observer is another great application that is developed by mac-Lloyd. This app helps you to work as a paranormal investigator. If you use this app then you will get access to some exciting features such as you will be able to communicate, detect and observe the ghosts. This app also includes an electro-magnetic signature which will help you to find out the paranormal activities around you.

There is a radar detector present in the app as well, which can be used to do the in-depth analysis of your readings. The latest version of this app contains some major enhancements which are made to the overall performance of the app and these updates give the app a high-tech look.

This app seems closer to be a professional quality tool and the technology used by this app is quite advanced. The sound effects in the application are really very creepy and the EMF detector of this app works fine and is accurate.

Above are the best paranormal apps for Android and iPhone explained. These are just for entertainment. You can try each of them one by one. Each of them has unique features.