In android phones, screen recording is a lot easier. You can easily use a third-party screen recorder in order to record your device’s screen. But, as compared to Android in the Apple Store, there are a few apps available for the purpose of screen recording. But still, there is a way to record screen on iOS devices.

In this article, I will introduce a screen recording app from vShare or Golden Cydia that makes screen recording possible on iOS devices. But the problem with this app, reported by many users is that this app affects most of the devices that are not jailbroken. You don’t need to worry about it as I will tell you a way to download this app easily without even getting jailbroken.

After the release of BB Rec screen recorder, it was also available in the iOS Apple Store. This app gained a huge amount of fame after its launch and still, it is considered as one of the best screen recording apps in the iOS market. This app is available to download without jailbreak. You don’t need any third-party apps for its installation.

A major amount of screen recording apps are available in the iOS platform but they have several issues such as lagging, etc. Only BB Rec screen recorder is capable to record your screen without even causing any lag.

The following are some of the amazing features of BB Rec screen recorder App. These features will help you to get an idea of this app before installing it. 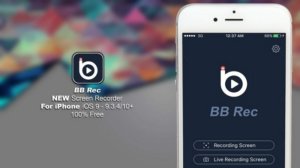 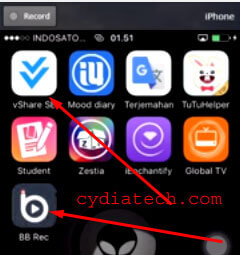 If you want to download BB Rec Screen Recorder without jailbreaking then you should follow this method.

Here, you will need a computer in order to proceed further. You can either use a Windows or a Mac PC to perform this method. Follow the steps below in order to prevent jailbreaking while installing BB Rec recorder on your iOS devices.

In case, if this method doesn’t work for you then you can use Golden Cydia instead of vShare app.

How can I record my gameplay with an iPhone or iPad?

How can I record my screen for free?

You can use the following screen records in order to record your screen for free.:

How do I record the screen on my iPad with sound?

You can simply do this by adding sound to your screen recorder.

First of all, swipe into the command center as before, long press (or, in an iPhone, 3D touch) on the Screen Recording button. In this panel, just toggle towards the iPhone or iPad’s built-in microphone. After that, you will get screen recording with sound on your iPhone or iPad.

Can I record a video while playing on my iPhone?

Yes, by using iPhone’s native screen recording tool you can not only record the screen but also you can record the internal sound as well.