Here’s something cybersecurity experts know that most people don’t—if it connects to the internet, then it can be hacked.

It seems simple enough, but many users don’t realize it’s not only their Facebook or email account that is susceptible to hacking. Cybercriminals can and do target all household items, including routers.

That’s because routers are not only the gateway to all your other devices, but hackers can harvest them for their resources.

So let’s talk about the threat of hacked routers and what you can do to repair yours if a cyber-attack happens.

Why Do Hackers Target Routers?

It’s important to remember what routers do to answer this question. They connect many devices to the internet, and thus to the same network. Once hackers gain control of a router, they can use it for activities like: 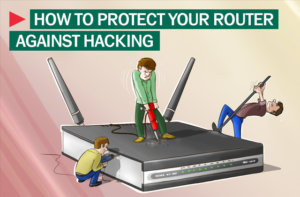 Popular and Cheap Routers Are At the Highest Risk

Hackers most frequently target popular routers that people buy from sites like Amazon. They also attack those that come bundled with a home internet connection from your internet service provider.

Why these? For the same reason why hackers mainly attack Windows computers. They choose these routers because most people use them. Thus, they’re able to cast a wide net and infect as many devices as possible with the least amount of effort.

What Are The Signs of a Hacked Router?

Your router manages your home internet and connected devices. Once compromised, cybercriminals can perpetuate many malicious activities. Be on the lookout for these symptoms of a hacked router:

Hackers have different motives. If you see a foreign IP address, it may be your neighbor looking for a free WiFi connection. Or it may be an actual risk. Whatever it is, you need to shut down the danger as soon as possible.

How to Fix a Hacked Router?

Here’s what you need to do to fix a hacked router. But now’s a good time to consider investing in a more secure router. We’re in the dawn of the WiFi-6 era, which is not only much faster but has more advanced safety features. If your router is more than a few years old, it may be time to upgrade.

In the meantime, you can fix a hacked router by following these steps:

It is the number one recommendation from the FBI to combat router hackers. Begin by holding the reset button until the router powers off. Once it reloads, you need to reconfigure your network settings from scratch.

As with all devices, router manufacturers release patches to fix security and performance issues. But most devices cannot automatically update on their own as your computer or phone can.

Once every 2-3 months, check for updates and follow instructions for how to install updates onto your router.

Remote Administration allows users to access your network and connected devices from a different location. It’s an excellent feature for many uses but can leave you vulnerable to attack.

Guess Network allows you to have a separate network for visitors to use that’s different from your home. It is the best way to protect your smart home devices that rely on an internet connection.

For the same reasons you need to use a strong password for your online accounts, you also need one for your router. Set robust passwords both for your personal and guest networks.

Use a Windows password manager to generate and secure those passwords. This way, you can create and have robust passwords at hand.

If you need to share the password with a guest, you can use secure share features to make it happen. It’s also a good idea to update this password once every month or so.

Whether you suspect your router has been hacked or not, use these tips to increase the safety of your home network. It will take you a few hours every few months, but it adds security everybody needs these days.